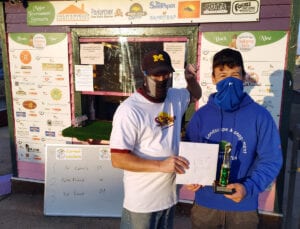 GOT IT DONE: Sal Caporale (right) accepts his trophy after winning the ‘Can You Beat Biggy?’ Thanksgiving Classic Nov. 28 at The Sand Trap, Ship Bottom. (Photo by David Biggy)
The Sand Trap’s 10th hole is murderous for many miniature golfers. Sal Caporale couldn’t conquer it. He carded a 6, but it didn’t matter.
“I just kept hitting it over the hump – over the hump, then over the hump again. That hole’s brutal,” said the 17-year-old Westwood High School senior, one of 96 paid players who competed in the “Can You Beat Biggy?” Thanksgiving Classic on Nov. 28. “It totally ruined things for me, but I rebounded. I got a 2 on the 11th hole, then a hole-in-one on No. 12, and I was set. I finished strong.”
So strong he made a great suggestion after receiving his first-place prize pack and trophy.
“Maybe we should name it the ‘Can You Beat Sal’ Tournament next year,” he said with a laugh.
Not a bad idea, considering Sal again edged O-Street Mini Golf Association President Aaron Kaminski by a stroke — while beating me by 8 strokes – to win the tournament for a second straight year. Caporale was the only contestant to score under 40, tallying a trio of holes-in-one on the way to a 39. “El Presidente,” who took multiple attempts at trying to snatch the top position, finished with a 40. LBI native Kim Travers finished third overall with a 44.
Of course, the biggest victory of the fundraising event didn’t belong to Sal. Rather, it was the $6,323 collected and delivered to the Hunger Foundation of Southern Ocean, this year’s tournament beneficiary.
“What you’re doing here is great,” Caporale said. “I’m impressed with how much the tournament raised.”
Bringing in well over $1,500 at the gate, which included several gracious donations by individuals, the tournament was sponsored in large part by several dozen local businesses or individuals, totaling nearly $4,800. 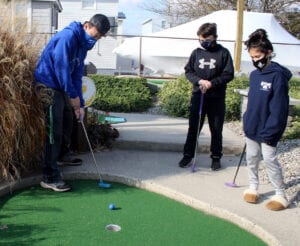 Sal Caporale drops his third putt on the eighth hole at The Sand Trap during the ‘Can You Beat Biggy?’ Thanksgiving Classic on Nov. 28. (Photo by David Biggy)
“This was fantastic,” said Coleen Garabedian, associated with the Garabedian Realty Group and Garabedian Construction Management, both of which sponsored holes. “It’s a great cause and we’re happy to be a part of it, both as sponsors and players. It’s been a tough year for a lot of people, so we were happy to help however we could.”
Interestingly, the hunt for the top spot among girls 12-and-under became a hotly contested one. And 11-year-old Taylor Garabedian appeared to have the No. 1 position locked up with a 52 until 11-year-old Victoria Caporale – winning at miniature golf seems to be a family habit – played her second round and scored a 51. Another 11-year-old, Nikos Davlouros, ended up as the top 12-and-under boy with a 53.
“Miniature golf is fun,” Taylor said. “I come here a lot to play, and I love it because it’s challenging. I thought I could beat Biggy.”
No, Taylor didn’t beat me, but she wasn’t far off. I scored a hole-in-one on No. 7 and knocked down a 2 on the dreaded 10th, but the same hole that did me in against Kaminski in last year’s launch round – that being the par-2 15th – did so again, as I scored a 5. Fortunately, I managed to two-putt the final three holes for a 47. Ten competitors scored better this year and two tied me.
One young lady, Camilla DiGiacinto, who recently arrived from Italy as an exchange student at Southern Regional High School for the remainder of the school year, didn’t expect to beat me. However, it was her miniature golf debut, so kudos to her for even trying The Sand Trap.
“This is my first time and I’m terrible,” said Camilla, who hopes at some point this winter to compete for the Southern girls swim team. “I had a good time. I didn’t think I’d beat you. I’m better when I swim.”
Surprisingly, she was OK with her 61 and gave miniature golf a 7 out of 10 on the fun meter.
Obviously, I have no choice but to give a 10 to course owner Larry Leff and manager John Schroeder, as well as Don Myers, who secured most of the sponsors, and the Southern Interact Club, which supplied a slew of volunteers who signed in participants, managed the leaderboard and served as official scorekeepers. 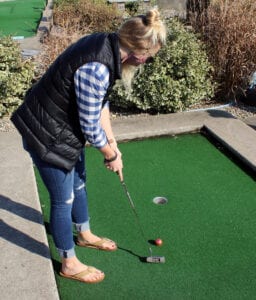 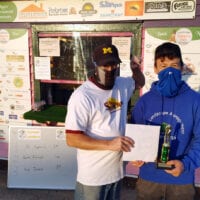 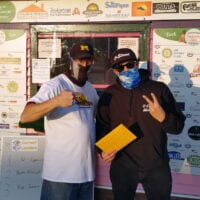 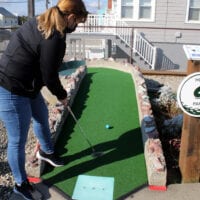