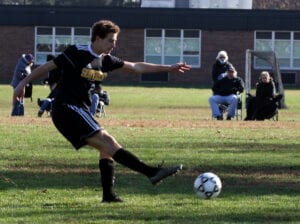 Southern’s Kevin Kiernan sends a shot on goal for the first score of the game during the Rams’ 3-3 tie with Toms River North on Nov. 14. (Photo by David Biggy)
For the 14 seniors on the Southern Regional boys soccer team, this season could have been a disaster, going the way of the spring season when it was canceled due to the coronavirus pandemic. Instead, the Nov. 14 clash with Toms River North marked the 14th game of the season – the last for the regular season.
“Coming into the season, we didn’t even know if we’d play,” said John Paul Prosperi. “We were blessed to have a 14-game season, and that was the best thing for us. This is what we looked forward to since we were kids, finishing our senior season with a chance to win a division title.”
With a 4-3, overtime victory over the Mariners early in the week, the Rams’ seniors had only that one thing on their minds entering Saturday’s contest.
“We’ve wanted a division title since we got here as freshmen,” said Kevin Kiernan, who scored his team’s first two goals in a 3-3 tie that secured a share of the Shore Conference Class A South title – the first time Southern had been atop the division in 31 years. “Both teams had one loss, so for the division title to come down to the last game of the regular season was crazy. We’ve been close the first three years, but to finally get there is amazing.”
Of course, getting there wasn’t easy. The Mariners made sure of it.

Southern’s Brandon Notte throws a ball into the penalty area, leading to the Rams’ third goal during their 3-3 tie with Toms River North on Nov. 14. (Photo by David Biggy)
After Kiernan gave Southern the initial lead when he received a free kick from Brandon Notte, turned and struck a shot from 16 yards less than a minute into the game, Toms River North quickly developed its attack and mounted pressure on Southern’s defense, eventually breaking through during the sixth minute when Mattias Asante touched in a corner kick from Nickelsen.
About 14 minutes later, North benefited from an unintentional handball in the penalty area, resulting in a penalty kick. Parker Nickelsen easily converted it for a 2-1 lead. The Rams struggled to develop much offense for the remainder of the half and trailed by a goal after 40 minutes.
The Rams came out for the second half with a lot more fire, led by the seniors. Just over five minutes into the half, Southern (12-1-1) tied the contest, when Notte’s throw-in from near midfield ended up bouncing down at the edge of the penalty area and Kiernan sent a left-footed ground ball into the right corner of the goal from 17 yards.
About four minutes later, the Mariners (11-1-1) regained the goal advantage when A.J. Emnace worked the ball into the right corner and sent a cross to the edge of the keeper’s box, where Nickelsen ran onto the ball and buried it inside the left post.
Much as they did the previous Monday, the Rams rebounded, continuing to press their attack in North’s half of the field during the next 10 minutes. With just over 20 minutes left in regulation, another throw-in by Notte – this one some 30 yards from goal – deflected off a North defender’s shoulder as Kiernan challenged for the 50-50 ball, and it ended up at the feet of senior Ryan Leavitt, who delivered an 11-yard shot into the left corner to make it 3-3.
“This team had a little more attacking power than it’s had the past two years, and they played on the edge a few times early in the season, playing in a few overtime games,” said head coach Guy Lockwood, who played on Southern’s last division-winning squad, in 1989. “So, these guys were tested quite a bit on how to be resilient, and that’s what helped this week with North, getting a draw and a victory.”
Kiernan had scored in overtime five days earlier to give Southern that victory over North, and almost did it again with 27 seconds left in the first overtime on Saturday, getting his left foot on the ball during a scramble in the penalty area, about 14 yards away. The opposing keeper was out of position, leaving a gaping space on the right side of the goal, but Kiernan’s touch skipped a foot wide of the right post.
During the second 10-minute overtime period, the Mariners carried the play, but the senior defensive crew of Prosperi, Kevin Cooney, Trey Batson and Notte remained rock solid in front of sophomore goalkeeper Nathaniel Bott, who in the first overtime made a diving punch on a ball near the left post to help preserve the tie.

Southern defender Kevin Cooney gets above a Toms River North forward to head the ball forward during the Rams’ 3-3 tie with the Mariners on Nov. 14. (Photo by David Biggy)
“Our defense has been great this season,” Prosperi said. “Trey has been solid on the left back, and Cooney, who came back this season after double hip surgery last year, has been playing like a beast. And between Notte and Chris Rizzo, we’ve been good. We didn’t have a lot of depth in the back, but we did the best we could and played well in big games.”
The Rams didn’t manage any scoring chances during the second overtime, but ultimately, the deadlock remained.
“North’s a really good team, and they possess the ball nicely,” Kiernan said. “To go down and then come back was amazing. We never gave up and ended up with the tie. We beat them the other day, so we’ll take co-champs. That’s fine with us.”
“It’s crazy. We’ve been so close the past few years and finally got it,” Prosperi said. “It’s upsetting that our last season together is almost over, but we couldn’t have asked for anything better. It’s exhilarating.”
Lockwood said it was fitting for his squad to score the division title against Toms River North on the last day of the regular season.
“We didn’t have a shot at the title without winning Monday, so our guys came with everything today,” he said. “And like on Monday, it was going to come down to who scored the last goal. That last goal was for a tie, but that’s OK. These boys have been looking at that banner in the gym for a couple years now, and they’ll be proud to finally put their number up there.”
The season isn’t over just yet, though. Southern still has this week’s NJSIAA Central East Group G tournament, for which the Rams are the second seed behind Toms River North. Of course, it’s not out of the question the two rivals will meet in the final on Saturday, Nov. 21.
“I don’t know what it really means in the end,” Lockwood said. “Maybe it’s just another round of games, but these boys want to win out. They don’t step on the field to just play some recreational game. They want to win and play the full week, and whether there’s a trophy or title at the end, I don’t think it matters to them.”
— David Biggy
biggy@thesandpaper.net

Go Slow With Wind | The SandPaper