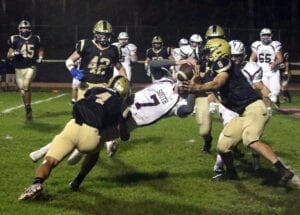 PINCHED: While Southern’s J.P. Ricciardi (4) slows Toms River South quarterback Jack Huber, Hank Gallacher (8) delivers a hit to force a first quarter fumble in the Rams’ 15-12 loss to the Indians on Oct. 23. (Photo by David Biggy)
It’s just a fact. Sometimes good football teams have rough games.
Southern Regional had one on Oct. 23, when the Rams turned over the ball five times, including a pair of fumbles inside Toms River South’s 20-yard line, and ended up with their first loss of the season, 15-12.
“Toms River South did exactly what they do. They took our run away and forced us to throw the ball,” said head coach Chuck Donohue Sr., whose squad started the season with three straight wins. “At times, we threw the ball really well, and at times we didn’t throw the ball really well. We had opportunities to score points, but we didn’t do the things we needed to do with the opportunities we had to win the game.”
Sure, the Indians held Southern running back Jaiden Brown to 121 yards on 24 carries – a week after Brown ran for a career-high 240 yards against Toms River North, which South upended during the first week of the season. Still, Brown picked up big chunks of yardage at times and scored both of Southern’s touchdowns, both in the second quarter, on bursts of 5 yards and 3 yards, as the Rams took a 12-7 lead into the half.
The Rams (3-1) thwarted the Indians on their first possession of the contest. After TRS opened with a long, 16-play possession and worked its way to Southern’s 1-yard line, J.P. Ricciardi slowed South quarterback Jack Huber as he tried to run around the right side on third-and-goal and Hank Gallacher hit Huber short of the goal line to force a fumble, recovered by Nate Committee with 5:44 left in the first quarter.
After a three-and-out and a punt, Southern managed to keep the Indians out of the end zone on their second possession before quickly moving down the field – fueled by a 44-yard pass play from Taylor Munt to Xavier Hendricks, followed by a 21-yard run by Brown. The Rams capped the seven-play, 84-yard drive with 9:03 left in the half when Brown scored from 5 yards away. The point-after conversion was no good. 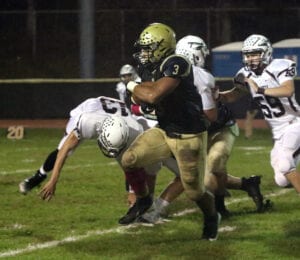 Southern running back Jaiden Brown gets into the secondary for some big yardage during the Rams’ 15-12 loss to Toms River South on Oct. 23. (Photo by David Biggy)
Toms River South responded with its own seven-play drive, covering 64 yards to take a 7-6 lead. But Southern again marched down the field. This time the Rams utilized two big plays, a 37-yard strike from Munt to Hendricks and a 29-yard pass to Hendricks that brought Southern to the 3-yard line. Brown plunged into the end zone to make it 12-7, with the extra point try again missed.
South’s first possession of the second half was cut short when Ricciardi intercepted a Huber pass at the Indians’ 17-yard line. However, on the next play Brown was stripped of the ball and South’s Elijah Metellus picked it up at the 20-yard line, avoided a tackle by Munt and raced down the left side of the field 80 yards for a touchdown. The Indians then complete a two-point conversion pass to go up by three points.
On the Rams’ next possession, they looked solid, again pushing downfield and threatening to add points. But after Committee took a fullback screen and turned a third-and-9 situation into first-and-goal at the 7-yard line, the Indians forced another fumble and recovered it.
“We had three wins and had no turnovers,” Donohue said. “Tonight, we turned the ball over five times. And when a guy picks up a fumble and goes 80 yards for a touchdown, it takes a lot of work to overcome that. South is a scrappy team and they were coming off a big loss to Donovan Catholic, so we knew they were going to come ready to play. We told our kids what they had to do to win, but it went the way I was afraid it would go.” 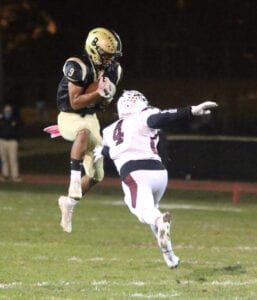 Southern’s Xavier Hendricks goes up to catch a Taylor Munt pass during the Rams’ 15-12 loss to Toms River South on Oct. 23. (Photo by David Biggy)
The Rams attempted to tie the contest when Gallacher lined up for a 36-yard field goal try, but the ball sailed wide to the left. On Southern’s next drive, Munt was picked off at the Indians’ 42-yard line with 5:06 to go. With 12 seconds on the clock and Southern on its opponent’s 36, Munt tried to connect with Alex Rainone for a TD but a jump-ball was intercepted by Tyler Madeo at the 1-yard line.
Munt ended up completing 11 of 16 passes for 205 yards and Hendricks snatched eight passes for 149 yards.
“Taylor made a lot of good throws and got us into positions where we had opportunities to score points,” Donohue said. “We just didn’t make the play when we needed it. We’re a good football team but didn’t play well tonight.”
The Rams on Friday will go to Toms River to square off with undefeated Donovan Catholic, which has allowed just 19 points in four lopsided victories, including the Griffins’ 49-6 thumping of Toms River South on Oct. 17. Donovan has averaged almost 43 points per game thus far.
“I’m expecting our kids to come back,” Donohue said. “This is a different kind of team we’re going to face, so we’re not going to be able to play like we did tonight. We have to get our heads right. We have to put this behind us, learn from the mistakes and understand how important the little things are.”
Pinelands Snags
First Victory
The Pinelands Regional football squad discovered a winning formula for the first time this season, when the Wildcats traveled to Lakewood on Oct. 24 and returned home with a 38-22 victory.
Nathan Jeannotte staked the Wildcats to a 6-0 lead with a 35-yard TD run in the first quarter and went on to rush for a career-high 157 yards on 18 carries to lead the offensive attack, through which Pinelands tallied nearly 400 yards of total offense. Shayne Michot added 72 yards on the ground, while Domenico Darcy contributed an additional 53 rushing yards.
Michot made it a 13-0 contest with a 4-yard TD run in the first quarter, before quarterback Ryan Allen delivered a pair of touchdown strikes – one for 15 yards and another for 16 yards – to Andrew Jenkins during the second quarter, as the Wildcats (1-3) took a 25-14, halftime lead.
Domenico’s 19-yard TD run in the third quarter and a fourth-quarter TD burst of 6 yards by Jeannotte capped the scoring for Pinelands, which had been outscored 126-20 through the first three games of the season. Allen completed four passes for 59 yards.
2020 Barnegat Squad
Loses for First Time
The Barnegat football team started off well against Manchester on Oct. 24, taking a 7-0 lead in the first quarter, but the Hawks scored a pair of touchdowns in the second quarter to take a 14-10 lead at the half and went on to knock off the Bengals, 27-16, handing Barnegat its first loss of the season.
Quarterback Matt Xiques completed 14 of 28 passes for 122 yards and a touchdown, but running back Nik DiLeo was held to 56 yards on 15 carries, as Manchester improved to 3-1. Wide receiver Andrew Vernieri ended with six receptions for 45 yards and a touchdown.
— David Biggy
biggy@thesandpaper.net 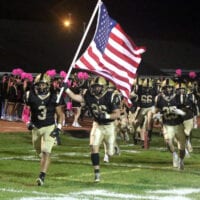 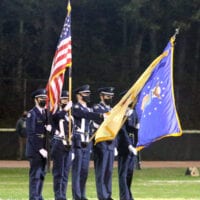 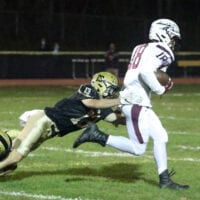 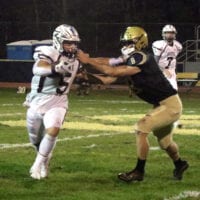 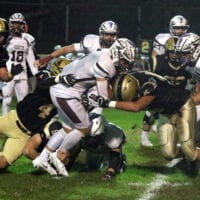 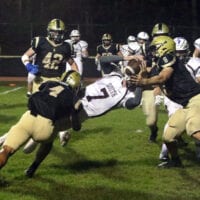 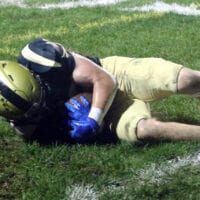 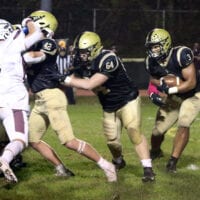 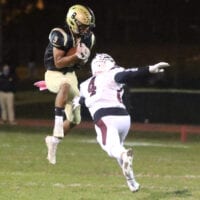 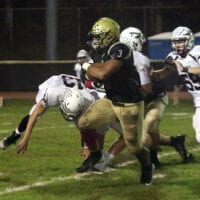 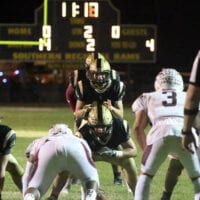